Jack Torrance’s new job at the Overlook Hotel is the perfect chance for a fresh start. As the off-season caretaker at the atmospheric old hotel, he’ll have plenty of time to spend reconnecting with his family and working on his writing. But as the harsh winter weather sets in, the idyllic location feels ever more remote . . . and more sinister. And the only one to notice the strange and terrible forces gathering around the Overlook is Danny Torrance, a uniquely gifted five-year-old.

“Come out and take your medicine!”
topiary animals creeping to life
a roque mallet/smash smash smash/broken bones
REDRUMCount ‘em: 1, 2, 3, 4—that’s 4 iconic images in The Shining that I will never forget. Normally if I finish a book and one image endures, that book is a success. But Stephen King is such a visceral writer. His prose itself is, well, prosaic. It’s weak, stuffed with clichés, and overly reliant on descriptive exposition. Where King succeeds is with images. He has a knack for memorable, hair-raising moments; it’s a shame that these moments only burst out occasionally from the surrounding excisable mediocrity.

Yet that criticism holds true for all of King’s writing. His writing is passable; his ability to create A Moment extraordinary. My biggest criticism of The Shining in particular is how derivative it is. The Shining is essentially Stephen King’s retelling of Shirley Jackson’s masterful horror novel The Haunting of Hill House. And it’s not an altogether bad retelling. The problem is the source material is so incredible that King was bound to fail.

In The Shining everything is straightforward. We know who these characters are, we know that they are being haunted, we know who is haunting them. It’s unambiguous and thus rather dull. In The Haunting of Hill House you finish the book knowing nothing. Indeed, it is a haunted house novel, yet you can’t even be sure that the house was haunted. The text merits rereading and deciphering and interpretations should vary from person to person.

Ironically, King directly mentions the influence of Hill House on Overlook Hotel in The Shining, writing,

“if it [Overlook] played its cards right they [Jack and his family] could end up flitting through the Overlook’s halls like insubstantial shades in a Shirley Jackson novel, whatever walked in Hill House walked alone, but you wouldn’t be alone in the Overlook, oh no, there would be plenty of company here.

That quote neatly summarizes my problem. We know exactly what’s happening at Overlook. A family of three falls into madness as the supernatural elements of the house take over. As a result, there’s not much interesting here besides, of course, the occasional superb image. The most interesting questions—Jack Torrance’s alcoholism and psychology, whether the hotel’s owners are aware of the problem, what happened to the previous hotel caretaker, why these dead guests are keen on haunting the Overlook: basically, how the hell did we get to this point of insanity?—are not only unanswered but essentially unexplored.

In sum:
1. Stephen King is a king of powerful images but a mere peasant when it comes to subtlety and profundity
2. Read Shirley Jackson’s The Haunting of Hill House 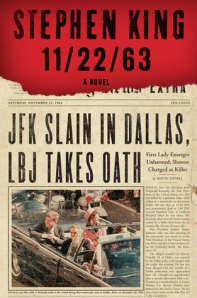 If you had the chance to change the course of history, would you? Would the consequences be what you hoped?

I am a person who struggles to accept when she is wrong, yet I am so happy to be wrong about Stephen King. After toiling through King’s The Stand, I was prepared to dismiss him. In The Stand King never stretched his storytelling skills. Everything escalated to the climax as one would expect and everything fell from the climax as one would expect. Ho-hum.

But in 11/22/63, I had moments of pity for Stephen King, since he wrote himself into character dilemmas and plot conundrums that defied conventional resolution. Nothing unrolled as expected in this book. So I pitied him. I pitied King because I knew he must have passed days and weeks struggling to extract himself from these self-created authorial quagmires. At the same time I admired him because he had actually done it: he had taken chances; he had pushed the story to uncomfortable places, places where a 10¢ resolution and a bit of deus ex machina wouldn’t suffice.

The novel is a true behemoth with over 800 pages dedicated to multiple genres. And although every genre element adds to the book, its greatest weakness is how it is simultaneously so many things. Sometimes King didn’t seem to know what the book wanted to be. Was it a simple time travel tale? a straight thriller? a revisionist piece of historical fiction? a small town love story? It is all of these things, but occasionally he lingers too long on one element, leading to some duller parts, especially around the middle. Yet it comes together splendidly in the end in the spectacular final 200 pages. By that point, the intrigue is staged, the characters are fully endeared to the reader and to each other, and King’s daringly bold plot strands have knotted into an unsolvable mess.

In the final chapters, every other page or so punches you in the heart. While the time travel bits keep you turning the pages—from the outset, you know that changing the past can only go poorly; the question is how it will go poorly—it is the character relationships that endure. For all of the bluster surrounding Stephen King as contemporary literature’s most famous horror writer, 11/22/63 is achingly romantic. It is gentle tale, which means it is King at his harshest.