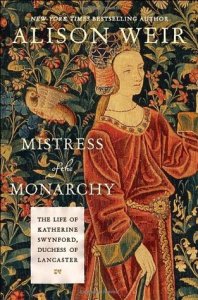 Acclaimed author Alison Weir has been prolific with her books on English royalty covering everything from the Houses of York and Lancaster to the reigns of the Tudors and beyond. Now this remarkable historian brings to life the extraordinary tale of the woman who was ancestor to them all: Katherine Swynford, a royal mistress who was to become one of the most crucial figures in the history of the British royal dynasties.

I’m pretty sure that if you go to the dictionary and search the word “boredom,” you’ll find the traditional entry, i.e., state of weariness due to lack of interest, and a new second entry: reading a 400 page biography of an obscure 14th century minor English noblewoman who becomes a duchess in less than 48 hours.

Or maybe I’m less bored than I think during these 5 months of vacation I’m currently living, and Mistress of the Monarchy, a biography of Katherine Sywnford, is actually a more thrilling story than it first appears. Of course, as author Alison Weir informs us in the introduction, very few sources from the late 1300s remain extant. Funnily enough, this vigorously researched work with footnotes aplenty is likely more “fictional” than certain über-biographical acts of modern “fiction” that we may read today. Amateur and professional historians, beware, but to anyone less obsessed with the futile search for fact and more concerned with the uncovering of hiSTORY, there’s a great story to be found here.

Because, as Weir says in the introduction, the story of Katherine Swynford is a love story. And for a life that was lived 700 years ago, when marriage was about who owned which duchy and which Count was warring with which Duke who was warring with which King, a marriage for loooove was decidedly rare. Primary sources scant as they are, it’s impossible to say with certainty that John of Gaunt, a veritable English prince and, as the Duke of Lancaster, the wealthiest landowner in all of Europe, married a minor noblewoman from modern day Belgium because he loved her. But it does seem that he married her for true sentiment, after, of course, engaging in a decade long extramarital affair that resulted in four bastards.

Do you remember in school being assigned a 10 page paper on some esoteric subject and wondering how you’d ever find enough material to make word count? Instead of getting down and dirty with your bibliography, you’d spend time making every period size 14 font, fiddling with the margins, and artfully tabbing your paragraphs to maximize page potential. Well Alison Weir, and indeed any Medieval biographer, should have been our god to worship. Because here is a woman who noticed an extreme paucity of historical resources and said, “Well, I think I’ll write a 400 page biography!” Consequently, there are pages where Weir simply lists English castles and landholdings and complex noble genealogies, simply because these greedy feudal lords recorded more information about what they owned and who had the right to own it when they died more than anything else.

Katherine Swynford is an extremely important woman, but sadly, this is for reproductive reasons more than anything. Her bastard children with John of Gaunt will complicate the English monarchy so much that it will lead to the War of the Roses. But once Henry Tudor gains the throne as Henry VII, every subsequent English monarch (and several American presidents!) will be descended from her. This is fact, but strangely, it’s hard to care about that when we see Katherine Swynford and only think of mythical love stories.